The purpose of this corporation is educational: the organization has been formed and is maintained to research, document, preserve, and share the historic legacy of the town of Havilah, the FIRST county seat for Kern County, California (1866 – 1874). Included in this purpose is the objective of providing for the advancement of education about the history of Havilah and early Kern County people and places, to the local community at large, and to any and all visitors to our quiet little community.

In 1865, Los Angeles and Tulare counties were pretty large ….. and, pretty far away especially if you had government-type business to take care of. At that time there were approximately 900 miners and 25 families in Havilah. In comparison, Baker’s Field (not yet Bakersfield) was still called Kern Island, and had only about six families living there. Citizens petitioned the State Legislature to allow them to create a new county. A committee was formed to look into the matter. This committee was comprised of:

Colonel Thomas Baker was appointed as the committee chairman, and on April 2, 1866, Havilah was named the very first county seat for the newly-formed Kern County, California. Gold mining began to falter in the 1870’s, and many of the prospectors went to work for the owners of the larger mines in the area, or went down into the valleys where they went into farming, ranching, and/or agriculture. A vote was taken in 1873 to move the county seat to the now larger town of Bakersfield. The story goes that due to “some irregularities” in the voting, the ballots from three voting districts were toss out. Later, when ordered to be restored, some of those votes could not be located, and Bakersfield won by a margin of 22 votes. The county seat was transferred to Bakersfield officially in 1874. (Our good friend Chris Brewer, the Great-great grandson of Col. Thomas Baker, told us that Col. Baker had those ballots — and now he has them. Chris is going to locate them in his stacks and stacks of Baker memorabilia and will give us one to add to our museum. He has already donated several historical Havilah items, photos and handwritten documents.) THANK YOU CHRIS !

To celebrate the 100th Anniversary of the founding of Kern County in 1966, a committee was formed and incorporated as the HAVILAH CENTENNIAL GROUP, INC. in August of 1963. The original members/directors of our corporation were:

Through the efforts of these folks and many others in the surrounding communities, a replica of the 1866 Court House, and the Old Havilah School House were built upon land donated by Frank and Cleone Shaw.

To celebrate the 150th Anniversary of the founding of Kern County, the current Kern County Board of Supervisors held a regularly scheduled Board meeting inside a large tent, located directly behind the school house building in Havilah on April 19th, 2016. The current directors of the Havilah Centennial Group, Inc. at that time were: 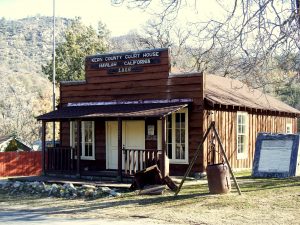 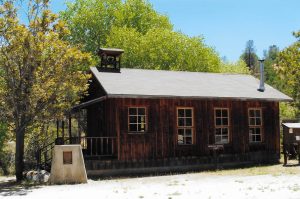 The Havilah Historical Society and Museum

IT HAS BEEN SAID THAT ALTHOUGH MANY PEOPLE DIED IN HAVILAH DURING IT’S EARLY DAYS,

Take yourself back to the Gold Rush Days when it was mostly men that came to the goldfields, and they were from all over the world. You will notice, we said MOSTLY MEN, because the early emigrants included very few women. The society they left behind was not only very conservative, but restrictive. Most of these fellows left from rural, agricultural, and / or farming areas. In those communities you were forced to learn and use good manners, go to school, churches, and you had all kinds of friends and business associates. In other words, you had to act a certain way — you had to BEHAVE!

On the other hand, here in early California, rules and especially any restrictions were scarce or non-existent. Wives, mothers, girlfriends, and children were hundreds if not thousands of miles away. Agencies we take for granted today, the Police Departments, Post Offices, Libraries, Banks, Roads, Schools, Churches, Courts, etc. were all back east or somewhere else, just not here. Like we said, all these were non-existent here in the 1840’s and the very early 1850’s when California was still under Mexican/Spanish Rule. To “keep the peace”, there were fewer than a couple hundred U.S. regular Army soldiers in all of California, and even then, they were separated into smaller units of say 20 to 30 men.

Men came here with one common goal and that was to “get rich quick, then move on”. All you had to do was find that “pocket of nuggets” and you’d be set for life. No need for education, risky investments, working for someone else, or yielding to the whims of Mother Nature.

This was the stage that was set here in the valleys. Gold was discovered near here at Hogeye Creek, shortly to be re-named as Keyesville for the mine discovered by Richard Keyes. Other mining towns were popping up in the Greenhorn Mountain areas, Quartzburg, Millville, Whiskey Flat (now called Kernville), and Isabella, (then known as Barton Junction, and now called Lake Isabella). The mining village of Clear Creek (yup, because it was established along a creek known as Clear Creek) was re-named Havilah —- “Land where there is Gold,” from the Bible —- by a former Kentuckian, and “poor little rich kid”), Asbury Harpending. This was not only the time of the Gold Rush, but it was also during the great Civil War. Harpending was a southern-sympathizer and had just been released from jail in San Francisco after his failed plot to arm a ship in the San Francisco Bay and prevent any ships from leaving that were carrying goods to re-supply the Union soldiers. After his release he heard of many like-minded Southerners in the Whiskey Flat and Keyesville areas, and after arriving there and trying his hand at gold prospecting, he decided that it was too much work.So he decided to plot out a town and sell business and residential lots. With some of the money he made from the land sales, he bought up several mining claims. He was quite a businessman, and even though he was only here for around 18 months, he left in early 1866 with over $800,000, which in today’s money would be equal to a little over $11 million dollars. AND HE DIDN’T OWN THE LAND!

Due to several wildfires, the town having to be rebuilt, then the fact that mining was faltering and businesses were closing, never to re-open; the school and the Post Office both being permanently closed by 1920 —- our mile-long business area became a living ghost town. Thanks to the generosity of Frank and Cleone Shaw for the donation of the land, and the rebuilding of the 1866 Havilah Court House and Old School House museums, the Havilah Centennial Group, Inc. and a handful of local “do-gooders / unpaid volunteers”, we continue to preserve the rich / historic legacy of Havilah, and educate future visitors for years to come. All of this has been, and continues to be, accomplished by totally all volunteer work. No one gets paid for doing what we do, SO PLEASE HELP US TO KEEP OUR DOORS OPEN (and preferably, WITH THE LIGHT S ON!) All Donations Are Tax-Deductible as we are a 501 (C) (3) Non-Profit, Educational, Public Benefit Corporation.

“A Tale of Two Cities”

OK, OK, so we all know the story of Havilah —- or do we? Well, how about a refresher? Really quickly ——

In the 1860’s, if local residents wanted to conduct any type of formal business such as property sales, mining claims, marriage licenses, birth, or death recordings, they had to travel to the county seat in either Tulare or Los Angeles counties. So, a petition was sent to the State asking for a new county to be formed locally. A vote was taken, and that’s when Kern County was born in Havilah, April 2, 1866. At that time Havilah had roughly 900 miners and 26 families, whereas Bakersfield didn’t even exist. In 1866, the area where Bakersfield now stands was called “Kern Island”, and consisted of swamplands and about 6 residents. Things changed. Col. Thomas Baker had cleared a lot of the swampy land and many new residents had moved in. Baker established a field of about 10 acres where travelers could stop and pick fruits for themselves, and could gather feed their animals. That parcel of land became known locally as Baker’s Field. In 1868, Philo Jewett suggested to the Board of Supervisors that the city be named, “Baker’s Field”. Over the years, the name just ran together, and is now known as Bakersfield.

Gold mining began to falter by the late 1860’s, early 1870’s, and Havilah had suffered several devasting fires. After about the third one, the residents began moving away.

By now, Bakersfield had grown due to mostly agricultural, dairy farming, oil field work, fruits & vegetable farming, etc. and a petition was filed again with the state, this time to move the county seat to Bakersfield. A vote was taken in 1872, there were 16 polling areas created within the county. The County Board of Supervisors, headed at that time again by Col. Thomas Baker decided to toss out the ballots from five of the polling areas, due to what they called “inconsistencies”.

As a result, Bakersfield won by 22 votes! Residents up in the mountain communities seriously objected, and challenged the outcome! The Court ordered those ballots to be restored in 1873, but those ballots could not be located, so, the Court decided that Bakersfield was the winner, and even though they had no courthouse building, the county seat was moved to the Town Hall building in Bakersfield in 1874.

Now, for the second city —– Belleville, (up in Holcomb Valley, Big Bear, CA area). Another mining town, about 10,000 local residents, and again in the 1860’s, lost the county seat to San Bernardino — by two votes! A good friend, and fellow Ham Radio operator, Sherman Davis, KI6WMI, told the story over the air a few days ago, and I looked it up. He was right, but like the missing ballots from the Havilah – Bakersfield balloting, the story says, “unfortunately, some of the ballots were lost when the wooden ballot box was placed near, and accidentally got kicked into the campfire!”

Fast Forward to modern times! In 2015, Jayne, KK6JPZ, and I were up in Exeter, CA., visiting with our friend, Chris Brewer, N6SKC, the Great-Great Grandson of Col. Thomas Baker, a fellow Ham Radio operator and a past president (Ex-Humbug) of the Peter Lebeck Chapter 1866 of E Clampus Vitus. Chris inherited much of the Baker memorabilia, and has it stored in warehouses at his ranch. “I remember seeing those ballots, but don’t know exactly where they are right now, but when I find them, I’ll give you one or two to place on display in the Havilah Courthouse Museum,” Chris said.

(I don’t think that there were any shenanigans going on back in 1873, when they claimed they couldn’t find the missing ballots — Tom Baker died in the typhoid epidemic Nov. 24, 1872! Probably no one knew that Baker had those ballots, and he was in no shape to even care at the time! — Al, N6ALP)

NEWS FLASH ! Chris contacted Jayne and I on Thursday, March 3, 2022, and told us that he found those ballots and has framed one of them for us! Jayne and I drove up to Exeter on Thursday March 10th , had lunch with Chris and picked it up! It will be prominently displayed in our Havilah Courthouse Museum! THANK YOU, CHRIS BREWER, FOR CONSERVING AN IMPORTANT PART OF OUR HAVILAH HISTORY! (Chris was voted into a lifetime membership in the Havilah Historical Society in 2015). 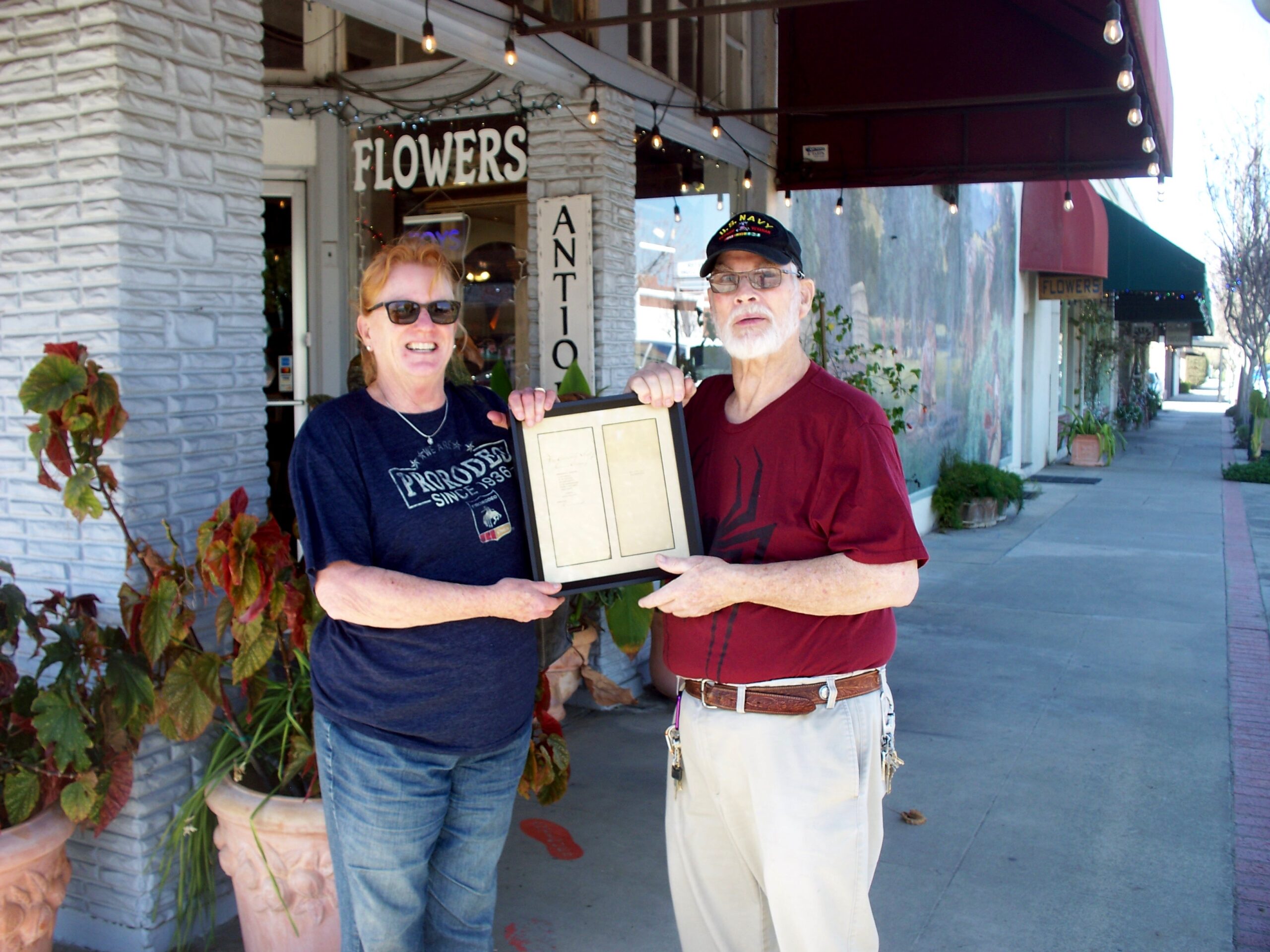 presenting one of the professionally mounted, “Lost Ballots” from 1872